Evolution at its best 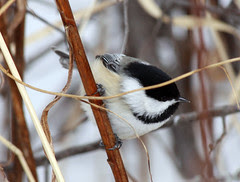 Today's New York Times has a great and lengthy opinion piece by Robert Wright about evolution. Of course, even though it's a surprisingly open-minded review of the theory and about God, it still places human beings at the pinnacle. It's as if even the wisest people are incapable of noticing just how much more evolved we birds and even some other non-primate mammals are in ever so many ways, including our eyesight, hearing, ability to fly, more efficient respiratory system, and much more complex vocal apparatus. Yes, people like to tout their "superior" brains, but somehow they can't bring themselves to use those brains to see how whale communication, using their voices to hear one another thousands of miles away, sort of precluded the necessity of inventing Twitter or email. People spend whole careers trying to tease out what contexts avian vocalizations are given in, but hello? We speak a different language because our senses and our lives are so different from yours, not because we're simpler or stupider. The world is ever so much richer and more complex for us because our senses allow us to perceive that richness. Small wonder we have no need for television or video games. You guys will NEVER understand what we're talking about until you fly a mile in our shoes--which is impossible because even if you could fly, you'd still have no concept of how our more complex sensory systems even perceive the world.

We birds hardly ever come to blows when disagreeing--it would be a huge jump in human evolution for you guys to finally figure out how to define and defend your property not with barbed wire fences and AK-47s and well-armed police departments and military might, but with song.

Robert Wright clearly has not observed a chickadee flock or he'd realize that the time he's speculating about is NOW. We chickadees already have developed moral intuitions and moral discourse of a higher level than humans have. We have enough intuition to know which species to accept into our foraging flocks and which to avoid, not by mindless prejudices but by the knowledge of which birds are literally trying to kill us. We let everyone know about danger and good food resources, and are perfectly happy sharing a feeder. (Of course, we'll never understand those piggish finches who stand in the food rather than simply taking what they need and moving away so everyone else has a chance.) We join forces to scold and shun shrikes and hawks and owls, but even with nasty predators we have a live and let live philosophy and don't go out of our way to seek them out.

Humans are far more narrowly altruistic than us chickadees. Yes--even in the area of altruism, we're more evolved. You won't find a chickadee setting a roadside bomb, lobbing a grenade, flying an airplane into a building, dropping an atomic bomb on an entire city, shooting anyone, or watching starving children on TV and not doing a friggin' thing to help. We chickadees aren't into pretense and all that crap either. Breast implants?! Botox???? Plastic surgery? Give me a break!

This is a tricky world to negotiate as a moral being, but I think our chickadee moral system is far more evolved than that of humans, no matter how you look at it. Maybe if those human brains were less egocentric and more evolved, they'd see it too.
at 7:52 AM