The pigeons in Miss Pettigrew Lives for a Day 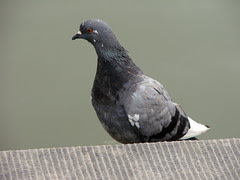 Oh, my--we pigeons do love a good romantic comedy, and so I can't say enough good things about the 2007 movie, Miss Pettigrew Lives for a Day, It's set just before World War II broke out in England, and we all know what a huge toll that war took on our ancestors. The director said on the commentary that he was trying to create an ominous tone set against the opulence of pre-war England, like people dancing on the Titanic.

The pigeons perched in the train station and the one on the sidewalk after Miss Pettigrew bids Miss Lafosse and her love off near the end helped set a tone of realism. Really, a world without pigeons makes no sense, does it? (That, of course, is why you'll not see a single pigeon viewing Avatar.)

The pigeons acting in the movie weren't just extras--they were trained actors who did a wonderful job, albeit limited. I don't understand why we pigeons don't have our own Pigeon Academy Awards to honor those of us who make movies better.
at 11:05 PM