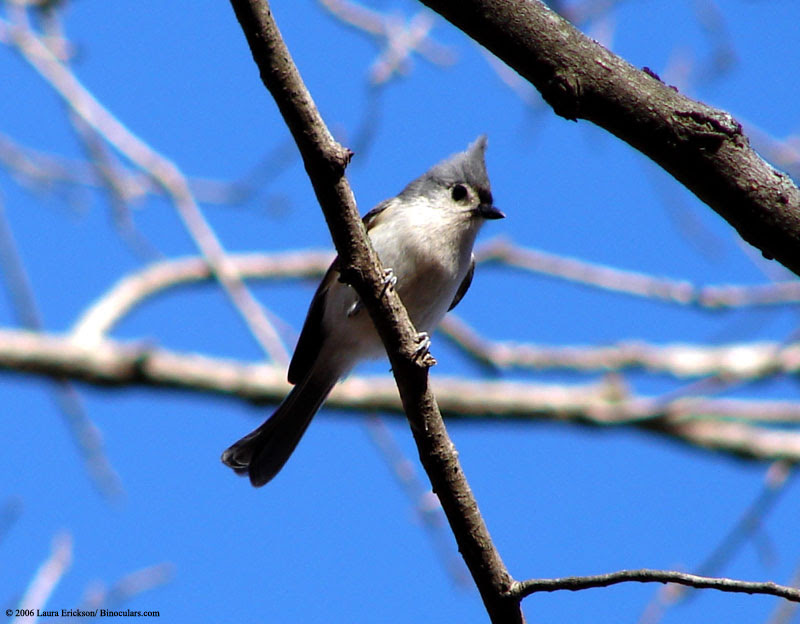 Vera here, and I'm so excited I could pop! We just got our first email!

The answer is, no. Like other Tufted Titmice, we are much too shy to be famous!

I asked my Aunt Lucy where our names came from. She said our Grandpa Paul was the one who asked our mother to give us those names. She said he never sang peter-peter-peter like a normal titmouse, instead singing all kinds of weird tunes like a mockingbird or something. She remembered that the first time he visited after we were hatched he crooned to us something about getting ridiculously old, chanting nonsense phrases. The words that stuck in her mind, even though they made no sense whatsoever, were, “If I'd been out till quarter to three, would you lock the door?”

Our Aunt Michelle remembered a couple of other things. She said Grandpa Paul was an entomologist! He was obsessed with singing insects. He and his brother, her Uncle John, were very competitive and always bickering about who was the best one. My grandmother fell for Grandpa Paul because he was “the cute one.” But Uncle John’s mate insisted he was the best one. Aunt Michelle said no one ever liked Uncle John's mate (well, except Uncle John--and by all accounts, she made him very happy). Sadly, when she arrived on the scene, the whole family fell apart.

Everyone loved Uncle George because he was so quiet and unassuming, and there was one other uncle, too. Aunt Michelle couldn’t remember his name (she’s Catholic and only remembers names if there’s a Pope attached). She said he was very eccentric. For a while he thought he was a woodpecker and couldn't stop drumming! When he finally quit that annoying habit, he became totally delusional, thinking he was the conductor on a little train. Aunt Michelle feels sad that she can’t remember his name because despite his eccentricities, he was very kind and funny and she always loved him best.

I think we may be related, too!

Congratulations on your blog; it's extremely well written. It also got me thinking.

There are places I remember all my life though some have changed.
Some forever (not for better;some have gone and some remain.

All these places have their moments
with lovers and friends I still can recall. Some are dead and some are living -- in my life I've loved them all.

Though I know I'll never lose affection for people and things that went before (I know I'll often stop and think about them),
in my life I love you more.

Just wanted you to know.