Humans, where are your brains?? 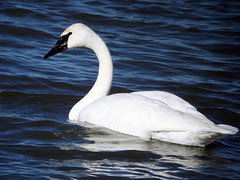 First, humans kill us off, wiping us out in the entire eastern and central US and Canada, so there were only two little isolated populations remaining on the planet. Then they "reintroduce" us from captive birds, expecting us to suddenly resume traditions of migration that died out along with our wild forefathers and foremothers. Meanwhile,the toxic lead shot they'd been spewing all over the landscape for centuries is still lurking in the bottom of the water looking for all the world like any other grit that we pick up. (They've stopped legally using that on waterfowl, FINALLY, but are still using it for upland birds--even in wetlands!--and are still using lead bullets!!! I mean, anyone who's read anything about the fall of the Roman Empire should know how dangerous lead is--and humans are supposed to be the literate ones!)

Anyway, there are still humans who somehow qualify for hunting licenses without knowing how to tell the difference between a swan and a goose! Again--it's not rocket science. Hello?! Snow Geese have black primaries--our plumage is entirely white. DUH!

What a mess. People report these kinds of stories in the news all the time, but what good does it do? Like I said, they're supposed to be the literate ones, and they're the species that actually has rocket scientists. Intelligence is as intelligence does. By that reckoning, humans are not all they're cracked up to be.
at 11:30 AM

And to top off the human ignorance they "practice tough love" by withholding the feeding that the Swans had become accustomed to and in effect starve them.

What a mess we have made. And the poor swans suffer.

Maybe Operation Migration is needed for the Trumpeters also.