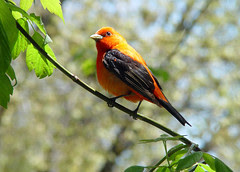 Hmmm. A new study shows that we Scarlet Tanagers living today are more than 2 percent lighter than our great great great great grandparents from back in the 1960s. According to the BBC's Earth News:

Songbirds in the US are getting smaller, and climate change is suspected as the cause.

A study of almost half a million birds, belonging to over 100 species, shows that many are gradually becoming lighter and growing shorter wings.

This shrinkage has occurred within just half a century, with the birds thought to be evolving into a smaller size in response to warmer temperatures.

However, there is little evidence that the change is harmful to the birds.

Details of the discovery are published in the journal Oikos.