Guest movie review: Up in the AIr 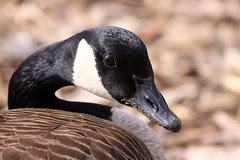 Well, I guess it's appropriate for a goose to write about a movie about air travel. Duluth's new Zinema theater even had old commercials about air travel that included one for Republic Airlines, which used a goose in their logo. (Wouldn't it have been funny if that was United's logo when they went down in the Hudson? I mean that in the most cynical way possible--we geese are still in mourning.)

Anyway, this movie pretty much epitomizes what we birds find so mystifying about humans. Holy crap--they are so friggin' subservient! Imagine a goose getting fired--no way, because no way would we ever put ourselves into such a dependent situation in the first place.

Anyway, that made us pretty confused about the whole George Clooney thing. And the whole monogamy thing is such a no-brainer--how else can one find meaning in one's life except by choosing a life mate and raising broods of young together and sticking together no matter where we are? So that was another element of the movie that I just couldn't relate to. The only thing left was the flying thing, but even there, we just take off and go. No airport security, no "backpacks"--we bring our family along and who needs anything else?

So the movie was confusing and disconcerting. I can't give it a beak down, though--people probably found it interesting, and I think George Clooney was great, though I'm sure he would have been happier had he been born a goose than a person with such a cruel job and no mate to count on and raise babies with.
at 11:09 PM

This book tells how people can help us birds. It's really good (honest!) so please read it.
Laura Erickson's For the Birds Radio Program