What kind of planet doesn't have birds? 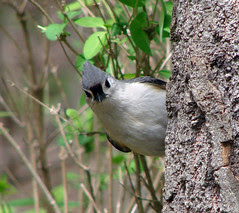 As the Twin Beaks official movie reviewer, I went to see Avatar today. Action movies aren't my forte, and those 3-D glasses are harder than heck to use when you weigh 20 grams and don't have ears that stick out or a nose. But my friends said it had a strong environmental message so I thought, what the heck, and went to the matinee.

WHOA! The action was brutal. No Sharp-shinned Hawk or Merlin is that blood-thirsty! But that's the way it is in the movie world, and I could handle that. I can even handle inappropriate bird song in the background of movies. What I cannot handle is the utter lack of bird song in the background, especially when a movie takes place in a huge, beautiful (if surreal) forest. I mean, how could blue, lanky human life forms evolve, along with flying reptiles, without birds? Unless those blue, lanky humans had hunted them all to extinction--I did notice the feathers on their arrows, but there was no other evidence of birds anywhere to be seen or heard. I wouldn't have minded James Cameron imagining a planet where evolution led to other life forms instead of birds, if only it had SONG. I mean, the blue and lanky humans spoke with human voices, just in a different language, and the animals and humans all grunted, so there was some sort of voice box being used for communication. It seems unfathomable to me that no animals at all had evolved to exploit any sound wavelengths for basic communication that could carry through the forest. It made the movie somehow hollow--popular culture is so filled with "idealized" nature rather than the real thing, like the turtle dove that flies out of Kevin Costner's "post" in Dances with Wolves when of course there was no way for one to be there back then. (In a lot of ways, Avatar reminded me of Dances with Wolves, except that Avatar lacked the sweet, peaceful scenes that made one way of life genuinely superior to another.) The forest in Avatar was visually beautiful, but a forest is filled with beautiful sounds as well as sights, and Mr. Cameron forgot all about that critical dimension.

So I'm giving Avatar beaks down. Good message, but too violent and Cameron's vision of an idealized forest was just that--visual, with none of the aural pleasures that a real forest, no matter on what planet it evolved, would have.
at 5:24 PM

First thing I thought was where were the birds? Of course none of the animals had fur, they were more like our idea of dinosaurs with thick skin. So then maybe those flying teradactyl things were the only birds. Of course, then where did they get the feathers for their arrows? I think someone missed something.