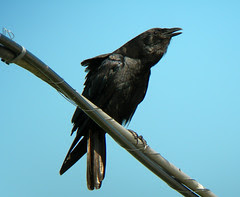 I brought the wife and kids to see Sherlock Holmes a couple of days ago. One of my friends said there was a Carrion Crow in several scenes, and since Robert Downey Jr. is the closest thing to a corvid that Hollywood has (his eyes are filled with intelligence, good humor, and cunning, and he's as handsome as any of us) I figured it would be a good romp. But uh oh--I was wrong. First off, I should not have brought the kids--the action was way too intense, and talk about LOUD! We could damage our hearing! And then, I expected the crow to be a symbol of the human world's most dapper, intelligent sleuth, but it turns out the poor guy was being abused as a symbol of death! Imagine that!! And really over-used in a stupid as well as creepy way.

Every day of my life I've awakened with other crows--first my mom and dad and brother and sisters, and then all our friends and neighbors sharing the big roost. If someone really died every time a crow appeared, whoa--who would be left? So much as I thought Robert Downey Jr. and Jude Law were the perfect human version of Holmes and Watson, I MUCH prefer the Kevin Corvid production that featured Casey Crow as Holmes and Charles Chickadee as his faithful sidekick and partner, using their wits, not violence, to bring down the most nefarious criminal hawks and shrikes.

I am looking forward to seeing the next one, just to see who they cast as Moriarty. It will, of course, be hard to find a human who can do as well as Marcus Magpie did--matching Holmes's intelligence and wit perfectly. I don't know that the human world has an actor who could truly be a match for Downey. But we'll see.
at 5:44 PM

I think Kevin Spacey has a wonderfully corvid presence and would make a fine Moriarty.