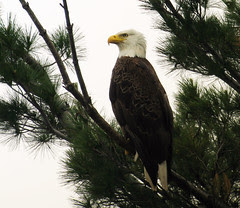 The League of Women Voters has a long and storied history of environmental concern and also of support of equal rights for many minorities. But if you can believe this, the League has never supported legislation extending the basic rights of citizenship to birds! It makes sense that chickadees and hummingbirds are not allowed to vote, since not one of them has resided in the United States for 18 years. But one would think that we Bald Eagles, who live well into our 20s and even 30s, would enjoy that right so fundamental to a democracy. We can legally be denied entry into public buildings and access to public records. We aren’t allowed to obtain a driver’s license in a single state, are denied the right to a social security card, and are even denied our basic right to bear arms—something the National Rifle Association has been equally remiss in addressing.

The average income for eagle families is well below the poverty level, and the League has closed their eyes to this egregious socioeconomic injustice. They supported the Endangered Species Act and other protectionist laws while denying us the right to own property or receive a basic public school education. The League of Women Voters’ spotty and shameful record when it comes to extending the basic rights of citizenship to an honorable body of Americans who have dedicated our lives to service as our national emblem should be corrected to restore the credibility of this organization before it's too late.
at 7:51 AM