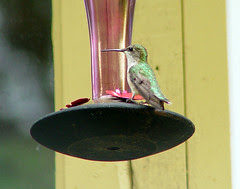 Of course we hummingbirds are supporting Michigan State! I mean, DUH! Their colors are green and white, and just as important, they have in their history two of the tiniest, yet most focused, speedy. aggressive, successful players in Big Ten history, from the early 70s. Mike Robinson, who was 5'10" (huge by hummingbird standards but right puny by basketball standards!) led the Big Ten in scoring during the two magical years he played with 5'5" guard Gary Ganakas, who led the Big Ten in assists. Gary Ganakas could zip in like a revved up hummingbird and grab the ball from a gigantic forward, all the while keeping track of where Mike Robinson was, toss the ball to him like it was no big deal, and Mike would pop it in for the score! That kind of sheer bravado, speed, and finesse was not unlike that I saw when my own tiny mate dive-bombed a Bald Eagle and lived to tell about it!

The years Gary Ganakas and Mike Robinson played, the Spartans had great seasons even if they didn't make the final four. Really, they played for a better reason than grabbing a trophy, just as my mate did when he attacked that eagle, or like every one of us does each fall when we strike out over the Gulf of Mexico--we cross the entire watery 640 miles or so without a moment's rest, during hurricane season, no less! There's a special kind of beauty and joy in taking on insurmountable challenges and holding one's own in the face of all odds. By that standard, that good old Michigan State team so many years ago might well have been channeling the best of what it means to be a hummingbird.

Gary Ganakas and Mike Robinson's numbers should have been retired, along with the oh-so-handsome and Zen-like Bill Kilgore. Legends of this amazing team are still passed from parent to child in hummingbird lore, which, when you think about it, is quite amazing in itself, since we hummingbirds are always in the tropics during most of basketball season--no one even knows how our ancestors found out about them. Probably heard about them from some chickadee.
at 6:38 AM