"White Fang, you are smarter than I thought." 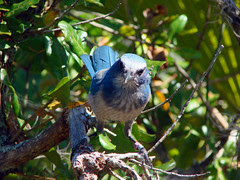 Remember in the book White Fang when Judge Scott insisted that there was no way his son Weedon could teach White Fang to leave the chickens alone? Weedon bet his father that he could, and left White Fang in the chicken house for over 2 hours. The wolf ignored the chickens completely, and in the end Judge Scott had to face White Fang and say, sixteen times, "White Fang, you are smarter than I thought."

Well, being a corvid, I know how smart birds can be, and find it endlessly frustrating that people pooh-pooh our intelligence--they even came up with that ridiculous term, "bird brain!" Now some scientists have made what they think is a breakthrough--they figured out that we corvids look people in the eye and can figure out what is going to happen. Well, DUH! I want so see people look ME straight in the eye and say, "Jerry Scrub-Jay, you are smarter than I thought."

Thank you very much, Mr. Jerry. I don't have a lot of jays in my yard, but I have noticed how carefully they examine their food before eating it and how carefully they watch for predators. A good idea here because we have a Cooper's Hawk in our neighborhood. I have also read that you corvids can count and remember how many food items you see. You can even communicate this information to other members of your flock. Pretty smart. As to "bird brains", only people deserve to be called that, at least in the way people mean it. Thanks again for writing.