Thanksgiving with the Talon'ted Gourmet 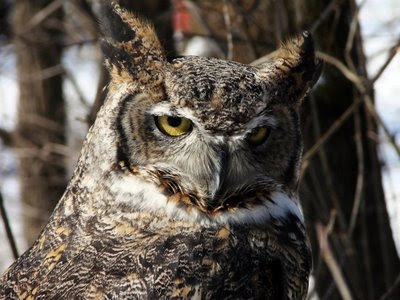 Thanksgiving's coming, and whenever I notice a new cookbook or TV cooking special, I can't help but chuckle. Imagine needing lessons in how to prepare food! Between our own instincts and the education our parents provide, we hardly need to turn to Rachael Ray to learn how to deal with a turkey.

Now humans must have a rather delicate digestive system or something, because they add all kinds of steps to what is a simple and basic all-American meal. Yet, oddly enough, those TV specials don't explain the most fun, but the trickiest, part of preparing a turkey dinner--getting that turkey in the first place. I've gotten pretty good at this, if I do say so myself.

The first step is, of course, to figure out where turkeys roost in your neck of the woods. You want to make your move fairly early at night, but after it's completely dark. You fly in and pick out the one with the fewest branches around her. Yes--I prefer hens to toms--they're smaller and face it, you're not going to eat the whole thing in one sitting. When you grab her back, you have to be quick and careful. The wings are so thick that you're probably not going to get a toehold, so right as your feet make contact, give her a big, powerful bite on the back of the neck. Try to hit the jugular--it's easier than you'd think if you pick one who's tucked in her head. If you do it right, she'll drop out of the tree easy as pie.

So there you have it. The tricky part is done. I always eat the head first--one good clean bite and you have a cropful without getting hardly any blood on your facial feathers. If I'm not very hungry, I leave it at that. But if I'm really hungry, I go for the breast meat. Don't get me wrong--I'm not the least bit worried about my cholesterol level. But that's the biggest chunks of meat. You're never going to get through that keel bone, and the wings make ripping into the back tricky. You might like the guts, especially if you're feeling like you need a bit of predigested plant material. Turkey guts can be mighty tasty if it's a good acorn year.

While you're feasting, the most important thing is to keep a lookout for foxes. I once heard someone say that Rachael Ray is a fox, but really, she wouldn't hurt a fly.