Another one bites the dust 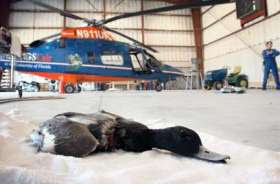 Boy--we ducks have to be SO careful up there! This poor guy (a Lesser Scaup) got hit by a medical helicopter (now THAT'S ironic!) outside Gainesville, Florida, on March 5. Thank goodness none of the people were killed, but still! Funeral services are pending, probably indefinitely, until the victim is identified (ducks NEVER seem to carry personal identification!) and next of kin notified.

No obituary yet, but a story about the accident appears in yesterday's West Volusa Beacon Online.

On the night of March 5, Irving was transporting an unconscious car-crash victim to the hospital. Flight nurse Marc Kazmierski and flight paramedic Ryan Fulford were in the back, tending to the patient.

The helicopter was about five miles out from Shands when the duck came through the windscreen.

"We were in a descent. The windshield just kind of exploded," Irving said. "You wouldn't think ducks would be out at night."

The duck just missed the throttles inside the cockpit.

The bird careened across the cockpit ceiling, breaking switches and circuit breakers. It came to rest in the back of the helicopter, at the feet of the medical team, leaving a trail of blood, feathers and duck innards.

"Some of the Plexiglas hit me in the cheek. It knocked out one lens of my eyeglasses," Irving said. "Luckily, I was wearing a helmet and eye protection."

He had minor bleeding from a cut on his cheek.

In lieu of flowers, friends are asked to buy a Duck Stamp.