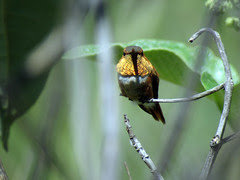 My hero, the bird conservation god himself, Paul Baicich, just sent out an email saying, "The USFWS Division of Migratory Bird Management has just announced the availability of its publication, "Birds of Conservation Concern 2008." As you may know, this publication identifies species, subspecies, and populations of migratory and nonmigratory birds most in need of additional conservation actions.

This list was created because Congress - when it enacted 1988 amendments to the Fish and Wildlife Conservation Act - directed the USFWS to: "identify species, subspecies, and populations of all migratory nongame birds that, without additional conservation actions, are likely to become candidates for listing under the Endangered Species Act [ESA] of 1973" (The first list was published in 1995 and the next in 2002.)

Clearly, "Bids of Conservation Concern 2008" can help focus work on refuges to make the public (and the staff) more aware of bird-conservation priorities.

The highly useful 91-page publication can be viewed and downloaded here:
http://www.fws.gov/migratorybirds/reports/BCC2008/BCC2008m.pdf"

Of course, we Rufous Hummingbirds need forest, so if you don't need to have a hard copy, save paper and read it online rather than printing it out.
at 9:23 AM