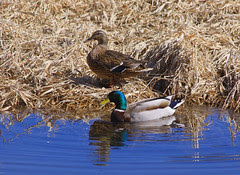 I was just looking through a dictionary for fun and what the heck? The mall in Mallard has the same Middle English from Anglo-French derivation as male or masculine. But the ard is pejorative? As in drunkard or sluggard??!!! We Mallard drakes epitomize the worst of masculinity? Give me a break!

Just because we can't help but try to mate with anyone or anything that will sit still long enough to let us, and just because if there were a blue dress in a stream there'd for sure be a compromising stain on it from one of us, is no reason to cast aspersions. You people elected an American president with pretty much the same randy mating habits--fond of his mate but fooling around a bit whenever the opportunity presented itself. He still balanced the budget and made a pretty effective president, and we make pretty effective ducks, to say the least. (And our budgets NEVER get out of balance!) Pejorative, indeed.
at 3:56 PM