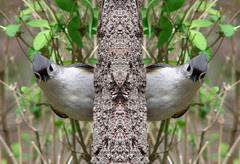 Here's a new feature--a Twin Beaks exclusive! Introducing CSI:Ithaca! For our first mystery, we're wondering who or what killed the poor Magnificent Frigatebird that showed up in Ithaca, NY, last fall during hurricane season.
It first appeared on Sunday, Sept. 21, and then was found dead on Monday, Sept. 22. It was brought to the Cornell University Museum of Vertebrates where these photos were taken before crack ornithological forensic pathologist Ryan Bakelaar, M.D. appeared on the scene. 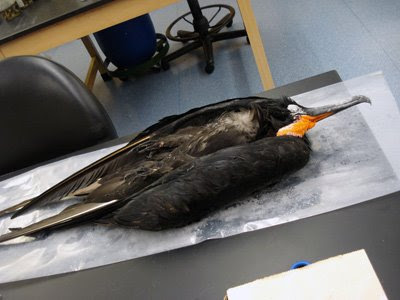 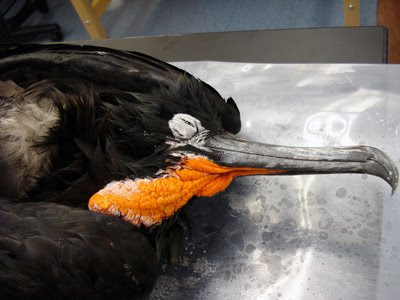 Though I did not have the opportunity of seeing the bird alive, I did have the privilege of preparing the specimen. I brought the celebrity bird to my current home in North Carolina to prep it and am happy to report that it is now back at its final resting place in the Cornell Collections.

I remember there being questions about the condition of the bird and possible cause of death, so between me and the Cornell Vet school which reviewed pathology slides, hopefully some will find the following of interest.

First, the bird was prepped as a roundskin, spreadwing, body skeleton, and multiple tissue samples were taken. We tried to get the biggest bang for the buck seeing as how we probobly won't get many of these birds in in the future (certainly, not from Ithaca, anyway).

The plumage characteristics were consistent, as many excellent photos of the live bird demonstrated, with an adult male Magnificent Frigatebird. The bird seemed slightly emaciated with slight pronouncement of the keel above the surrounding pectoralis muscles, indicating that this muscle was likely being metabolized for energy. The bird was several hundred grams lighter than what would be expected (at least compared to the weight that Sibley cites in his guide.....I don't know how he gets the info).

On preparation, there was minimal fat; this would be expected as fat deposits would be metabolized prior to muscle except for some specific spots. There was only a trace of fat in the periorbital area, behind the eye, and near the proximal leg/abdominal area. The stomach was empty and there were 3 separate identifiable pathologic/parasitic processes which were found:

1) On prep, a large amount of parasites were seen over the lower pectoralis muscles and proximal leg muscles. The final diagnosis from the Vet School pathology report was Metazoanosis, which bascially shows parasitic non-bacterial cells not otherwise specified. Evaluation of photos led to a possible diagnosis of apicomplexa parasites, which are can be seen in the active muscle tissues of birds.

3) In the lower aspect of the left lung, there was a lesion approximately 1 cm x 1 cm that was consistent with Aspergillosis. This is a fungus that can form, especially in the lungs, a complex called an aspergilloma which contains a fungal core surrounded by inflammatory and scar tissues. This fungus can sometimes spread, leading to a condition called disseminated aspergillosis where these fungi can be seen forming elsewhere in the body but none of these were found.

Unfortunately, due to a combination of repeated freezing and thawing and problems with tissue fixation, the apicomplexa parasites and nematodes could not be further identified. The same problem was associated with the remainder of the tissues. Several slides were not able to demonstrate pathology due to the above issues but one interesting finding was hypercellular bone marrow. Both the erythroid (red blood cell) and myeloid (white blood cell) lineage precursors were found to be hypercellular. Don't know what in this case would cause erythroid proliferation (physiologic stress???) but either of the 3 parasitic processes could definitely lead to the body stimulating the bone marrow to produce WBC's to combat these infections. There was also a lack of fat in the marrow, consistent with a bird that was metabolizing normal tissue for energy production.

Overall, the cause of death of this bird could not be determined from these tissue sections. Some of the changes in the bone marrow interpreted as serous atrophy of fat, as well as finding from the gross exam during preparation suggest chronic inanition as a potential cause.

I had to look up inanition and Webster Miriam say that it is "the quality or state of being empty: a: the exhausted condition that results from lack of food and water b: the absence or loss of social, moral, or intellectual vitality or vigor." My guess is that "a" is more applicable to this case.

So, despite the fact there there were three distinct pathologic processes, these were likely not the cause of the birds death. Rather, as we might expect from a bird likely blown by Hurricane Ike off the ocean over Texas about 2 weeks prior to the bird being found in Ithaca and deposited in the interior, the bird probably starved. Not many flying fish to catch or terns to harass over Cayuga Lake. I remember following the reports after Ike hit the Texas coast and recall many frigatebirds being seen in coastal areas and some miles in from the coast. I believe there was also a report of a frigate in Ohio around the same time as the Ithaca bird.

I hope this is helpful. I do have photos of the specimen immediately after prep that shows the very fleshy gular pouch (it's amazing how much the pouch dries out and atrophies) and of the muscle parasites. I also have the final pathology report if any are interested. Please e-mail me what you want and I'll try to get them to you.

Thanks to Dr. Elizabeth Buckles of the Cornell Vet school for review of the tissue specimens.

Thanks SO much, Dr. Bakelaar! This is better than having Gil Grissom on the job! (By the way, Dr. Bakelaar's far too modest to call himself a "crack ornithological forensic pathologist"--that was our own creation. But he really is an M.D.)
at 6:36 PM

Poor Magnificent Frigatebird, so hungry and so far from home.

Yeah. The biggest difference between the CSI programs on TV and CSI: Ithaca is that the TV versions are fiction. This is sadder than sad because it's real.