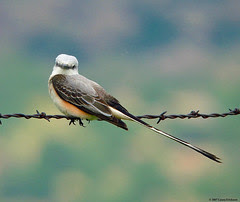 Oh, my gosh! They're talking about poisoning plants along the Mexican border to make it easier to spot illegal immigrants! What the @$#%^&!! I mean, we birds NEED those plants! And ::ahem:: don't people learn from their past mistakes???

The U.S. Border Patrol plans to poison the plant life along a 1.1-mile stretch of the Rio Grande riverbank as soon as Wednesday to get rid of the hiding places used by smugglers, robbers and illegal immigrants.

If successful, the $2.1 million pilot project could later be duplicated along as many as 130 miles of river in the patrol’s Laredo Sector, as well as other parts of the U.S.-Mexico border.

Although Border Patrol and U.S. Environmental Protection Agency officials say the chemical is safe for animals, detractors say the experiment is reminiscent of the Vietnam War-era Agent Orange chemical program and raises questions about long-term effects.

“It is unprecedented that they’d do it in a populated area,” he said of spraying the edge of the Rio Grande as it weaves between the cities of Laredo and Nuevo Laredo, Mexico.

Read the whole distressing story at the Houston Chronicle Online.
at 6:16 AM

Poisining is the lazy way out. Here's the obvious answer.
Hire Mexicans to cut the brush.

If the economy doesn't recover soon, Mexico will have to stop Americans crossing Illegally into Mexico

If you want to use Vietnam era technology, why not napalm?