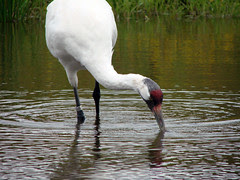 Heartbreaking news from Tom Stehn (a human, but one of the best) on the Ides of March:

The ninth aerial census of the 2008-09 crane season at Aransas was conducted March 15, 2009 with USFWS observer Tom Stehn in a Cessna 210 piloted by Gary Ritchey of Air Transit Solutions of Castroville, Texas. Viewing conditions were less than ideal with overcast skies and occasional light rain. Parts of the crane range were not flown as rain and lightning ended the flight after 3.7 hours.

Four dead whooping cranes have been picked up this winter; at least two were emaciated, and the virus IBD (infectious bursal disease) has been isolated from one of the juveniles by Dr. Hon Ip at the National Wildlife Health Center in Madison, Wisconsin. It is not yet known if this strain of IBD is pathogenic to whooping cranes, but it seems probable. The 4th carcass discovered this winter was an old pile of white-plumaged feathers discovered March 2nd during a blue crab count conducted by volunteer Katherine Cullen and two Chinese biologists. The two Chinese that have cranes on their refuges in China expertly identified the feathers. On today’s flight, observations confirmed that one additional adult is missing leaving a one-adult family just south of Panther Point on Matagorda. Also, the refuge’s Pipeline and Matagorda’s Airport juveniles are missing and listed as dead. These last 3 mortalities had presumably all occurred prior to the February 25th flight, with observations on today’s flight confirming the losses.

One juvenile whooping crane was confirmed on the Platte River in Nebraska on February 20th. This is presumably the juvenile that had over-wintered in Oklahoma and probably moved north with sandhill cranes. It was still present on the Platte through March 9 and presumably is still there.

I have been asked how the current poor conditions of the cranes may affect the migration. I have no idea how that may affect the timing of the migration which seems to vary by only about one week from year to year. Low numbers of whooping cranes start leaving Aransas the last week in March, with the majority of the cranes departing the first 2 weeks in April. The last of the breeding pairs have all gone by April 21st; a few subadults occasionally stay into May. I expect the migration to proceed normally, with birds making it all the way to Wood Buffalo National Park in Canada. However, mortality in the migration could increase. My next census flight is scheduled for the week of April 6th to see how the migration is progressing.

Three whooping crane subadults continue to use farm fields south of Austwell. They were seen in a pond next to an agricultural field on March 12th, but were not searched for on today’s flight due to lack of time.

Management practices are aiding the cranes this winter. Crane locations on the flight included 7 observed at man-made fresh water sources, 17 on burned uplands, 33 on unburned uplands mostly foraging for tubers where feral hogs have rooted up the earth, 4 at game feeders, 1 on a well pad, and 23 in open bay habitat. Two cranes were on a recent burn on Matagorda Island conducted March 10th. Tides have risen somewhat since the previous flight on February 25th. Salinities remain high, measured recently at 30 ppt in the refuge boat canal. The drought rated as “exceptional” shows no sign of ending in central and south Texas. Many counties have imposed prescribed burn bans due to the fire danger. However, rain received in south Texas on March 14-15 has helped a little.

Blue crabs are still scarce due to the drought. These are the worst conditions I have ever observed for the cranes at Aransas, with some birds looking thin and with disheveled plumage. I wish I had better news to report. The refuge is continuing its program of supplemental feeding with corn. A moderate response by the whooping cranes has been observed with 76 photographs taken by remote motion-activated cameras in the past week of whooping cranes at refuge feeders. Other animals eating the corn include feral hogs, deer, raccoons, grackles and just a few remaining wintering sandhill cranes.

The USFWS used 2 airboats the week of February 23rd to pick up 411 abandoned crab traps in the crane area. This was done in conjunction with a program organized by Texas Parks and Wildlife Department to pick up abandoned traps all along the Texas coast. Waters within the boundary of Matagorda Island National Wildlife Refuge have recently been closed permanently to commercial crabbing with signs posted at most entrances into the marsh.