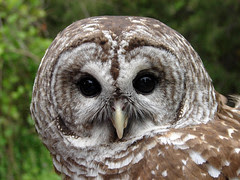 I couldn't help but wonder about the Peterson field guide sitting on the counter in the Julia Child's kitchen display at the Smithsonian. And suddenly a little bird (well, actually David Spector, in the biology department at Central Connecticut State University), told me that "when Julia Child was a student at Smith College she took at least one theater class with Samuel Eliot, long-time theater professor there who had been involved with the classic theater scene in Greenwich Village and Provincetown in the early part of the 20th century. The relevance here is that Sam Eliot was also the dean of Western Massachusetts birdwatchers, co-author of the classic Bagg and Eliot Birds of the Connecticut Valley. There's a chance that Julia Child picked up an interest in birds from her theater professor. Of course, there's also a chance that the field guide was in her kitchen to help in the identification of game."

hey i saw that exhibit a couple weeks ago

Did you notice the Peterson guide?