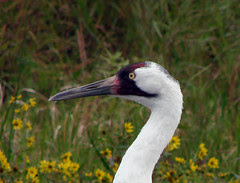 Oh, my. I don't even know what to say. This just in from the Houston Chronicle:

ROCKPORT, Texas — Wildlife managers are worried that some of the whooping cranes wintering at Aransas National Wildlife Refuge may be too weak and malnourished to successfully make their return to Canada this season.

The drought has affected the flock that spends each winter on the Texas Gulf Coast. The birds have had trouble finding food because low water levels have decreased the number of blue crabs, which make up 85 percent of the endangered species' diet.

"These are the worst conditions I have ever observed for the cranes at Aransas, with some birds looking thin and with disheveled plumage," Tom Stehn, U.S. Fish and Wildlife Service whooping crane coordinator, wrote in a March 15 report.

The flock had a record number of 270 when it arrived last fall. Six adults and 15 chicks had died as of March 15, leaving the flock at 249.

Read the rest of this disheartening news here.
at 6:48 AM