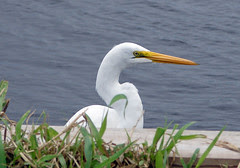 We egrets don't earn much of an income, but if I had $15, I'd run to my nearest post office and buy a Duck Stamp. Yeah, yeah, I'm not a hunter, and I'm certainly not a game bird, but that's not the point. Hunters and non-hunters buy Duck Stamps to support HABITAT--and habitat is something ALL of us need. Jim Williams, who writes for the Minneapolis Star-Tribune, wrote on the Minnesota Ornithologists' Union listserv yesterday:

Yesterday, Interior Secretary Ken Salazar announced $26 million in grants under the North American Wetlands Conservation Act and $11.5 million in Duck Stamp-related refuge acquisition for the National Wildlife Refuge System. The money will be used to protect and restore more than 200,000 acres of wetland areas and wildlife habitat in the U.S. and Mexico.

These are your Duck Stamp dollars making a difference for habitat. Ninety-eight cents of every dollar spent on Duck Stamps goes towards land acquisition that benefits hundreds of species of non-game birds as well as hunted waterfowl.

And that's the truth. You get a beautiful stamp for 30 cents and you give us birds 14.70 worth of quality habitat. What a bargain!